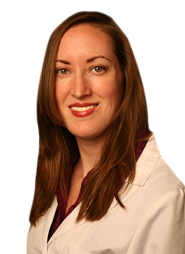 Jane Manly, O.D. is local to the area having grown up in neighboring Economy Borough. She discovered a love of science at an early age and eventually decided that optometry would be a great way to use her interests to make a difference in other’s lives. She earned a BS in Life Science from Pennsylvania State University in just three years and then immediately continued on at Pennsylvania College of Optometry (now Salus University) earning both a BS in Visual Science and a Doctor of Optometry degree, graduating in 2005 with honors.

After graduating, Dr. Manly returned to the Pittsburgh area and started to work at various retail optical chains until she found a permanent position with LasikPlus where she spent the last 14 years changing people’s lives by helping them eliminate their dependency on glasses and contact lenses. During that time, she also continued to work at several retail optical chains to have the best of both worlds with providing both medical and optical services to her patients.

In her free time, Dr. Manly enjoys traveling to new and exotic places and is always looking for her next adventure. She also likes to keep active and participates in many activities such as hiking, backpacking, roller derby, skiing, bowling, axe throwing, and many others.